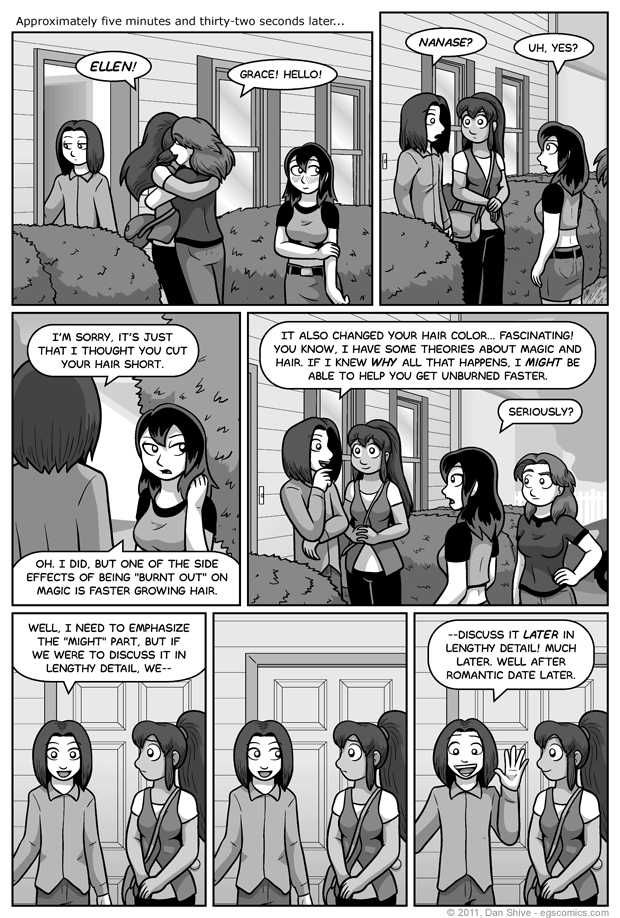 I love it when I can legitimately use copy/paste tactics, but I always feel lazy all the same when I do. It's a bit weird when considering that, even with said tactics, I drew 16 different character drawings for this comic. Well, 15.5. I'm not sure if I can fully count Tedd's back in good conscience given that his hair is basically just a Pac-Man ghost when viewed from behind.

I originally had Tedd reacting to Ellen and Grace hugging. Then I remembered that was completely contrary to Tedd's state of mind, the storyline and everything between, so I smacked myself upside the head and fixed it.

Ellen is dressed in a new version of her old outfit. Well, minus the jacket. I felt it was appropriate. I've always been holding off on putting Nanase in that outfit again. I almost had her wear it during the locker scene, but I decided to save it for the date.

Grace, meanwhile, is wearing something she's never worn before. I wanted to give her a nice outfit, but I wanted something in short sleeves and not just a t-shirt, so... VEST! I also think this is the first time she's had a purse, but I'm not certain. I don't have a purse database.