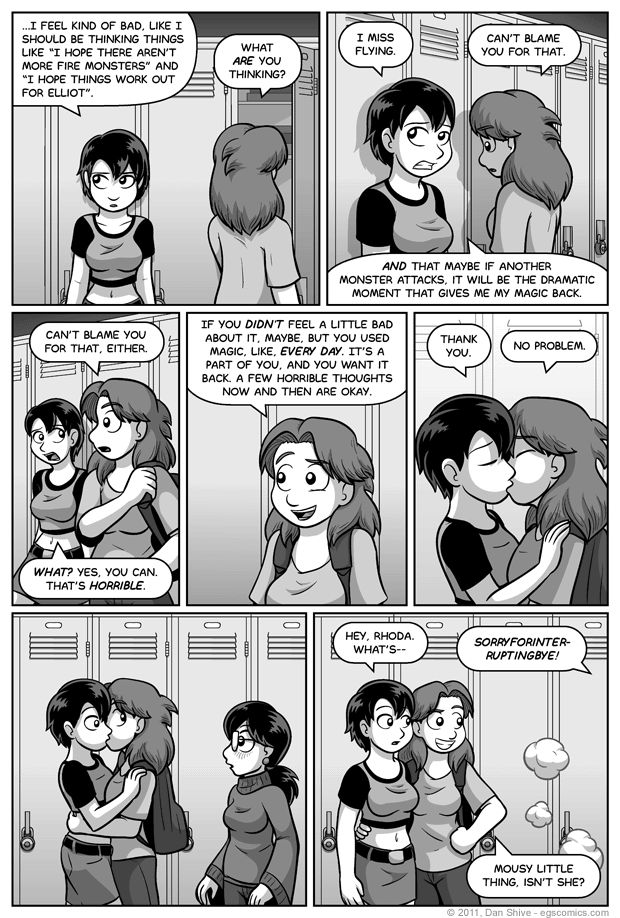 In case it wasn't apparent from a previous comic, Nanase officially does not care about hiding her relationship with Ellen anymore. She only really worried about it getting back to her family, and that ship has sorta sailed.

Ellen's view hasn't actually changed much, as she was pretty much just going along with whatever Nanase wanted in that regard. It's probably a safe bet, however, that she's happy to not be hiding it anymore.

The "dramatic moment" angle is based on a suggestion by Susan, which was suggested to Susan by Jerry. As such, it's possible she's on to something in panel two. Either way, this isn't the last we'll be hearing of this.

For ze record, I agree with Ellen in panel four. We're human (well, most of us), and we're going to have selfish and/or horrible thoughts and/or feelings on occasion whether we want them or not. Those thoughts and feelings on their own aren't that bad so long as we don't allow them to lead to bad behavior and understand why that behavior would be bad.

For example, let's say I'm standing in a line while there's some jerk behind me talking loudly and obnoxiously on a cell phone. I don't believe my thoughts regarding what I'd like to do to that person are so bad so long as I am aware of why carrying out the thoughts would be bad (be it about the morality, the consequences, or both), and don't actually turn around and punch them in the face.

I'm emphasizing the "understanding" part possibly more than necessary because I think that's important. It's one thing to be told that something is bad and shouldn't be done, but it's another to actually get why it shouldn't be done. There are plenty of rules and laws that get disobeyed on the basis that people don't understand the reasoning behind them. There are also laws and rules that get disobeyed because people do understand the reasoning, but I still consider that a step above simply not getting the point.

When initially considering who should interrupt this kiss, I was trying to come up with yet another extra. I thought things like "some guy could be in awe" or "some girl who's bewildered". Looking back, it so obviously had to be Rhoda, especially after the last comic.

Nanase's outfit was an attempt to return somewhat to her earlier fashion sense while being a bit more sensible in what she's wearing. The initial sketches for this comic had a variety of patterns for her top, with the end result being a sort of happy medium. It's simple, but I like the look of it, and it's different enough from what's come before.

Other than a bare midriff, I wanted her outfit to have a skirt. The detail on the top made me want to make the skirt more elaborate, but I wasn't sure what to do with it. I eventually settled on a style that, for me at least, was inspired by denim skirts. The belt, in my opinion, makes it go with the top a lot better, and the pockets help, too.

Given the inspiration, her skirt should have a zipper in the front, but it made it more difficult to tell that it was a skirt and not shorts, particularly given the angles in this comic and my simplistic art style. She might get a skirt in the future with a zipper in the front (or maybe I'll just retcon the heck out of this skirt), but I felt it was just best to leave the zipper off. If any women in the audience have logic regarding why that was a horrible thing to do, please let me know. It's the only way I'll learn.