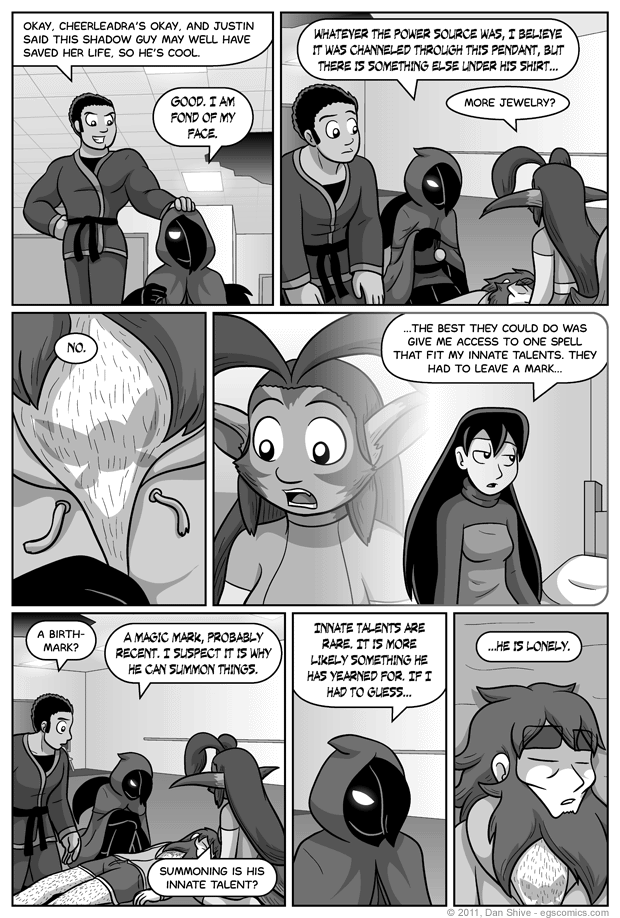 ...I just blew my own mind. If I had pushed this revelation back by just one day, this would have been the one year anniversary of Susan talking about the mark the immortals gave her. It's not all that huge of a coincidence, but still.

I had to manually resize the sketches of Greg in panels two and five for this comic. As big as he's supposed to be, I had made him too big, which is easy to do. I always used to imagine him being 7' tall, but his official height (which came about from using 3D stuff to help with backgrounds) is more like 6'7", which is still over half a foot taller than Justin.

I think the actual reason Greg wound up so tall and not just muscular is basically the same reason Tedd wound up with purple hair. I couldn't draw Tedd's hair as being black without it looking like an ink blob, and I couldn't pull off Greg looking big simply by drawing him as a little bit tall and muscular. It was just beyond my abilities at the time.

End result? REALLY tall Greg. I think this sort of happened with Hedge, too, though he's a less extreme case.

Okay, this is a bit tangential, but I've been wanting to rant about this ever since a character on Seinfeld claimed there were only "coincidences", and that there was no difference between a big or small one.

One can argue that, big or small, a coincidence is a coincidence, but that's not the point. The point is that coincidences that are big are usually more interesting, and are more fairly called into question.

Of course, in the episode, the character saying something was a big coincidence was expressing suspicions that a friend of the other character had stolen something, and that other character was the one saying coincidences don't vary in size which was probably more a defense of her friend than a emphatic argument against the nature of coincidences, but it's been on my chest like a weird shaped mark for years now, and it's high time it got off.