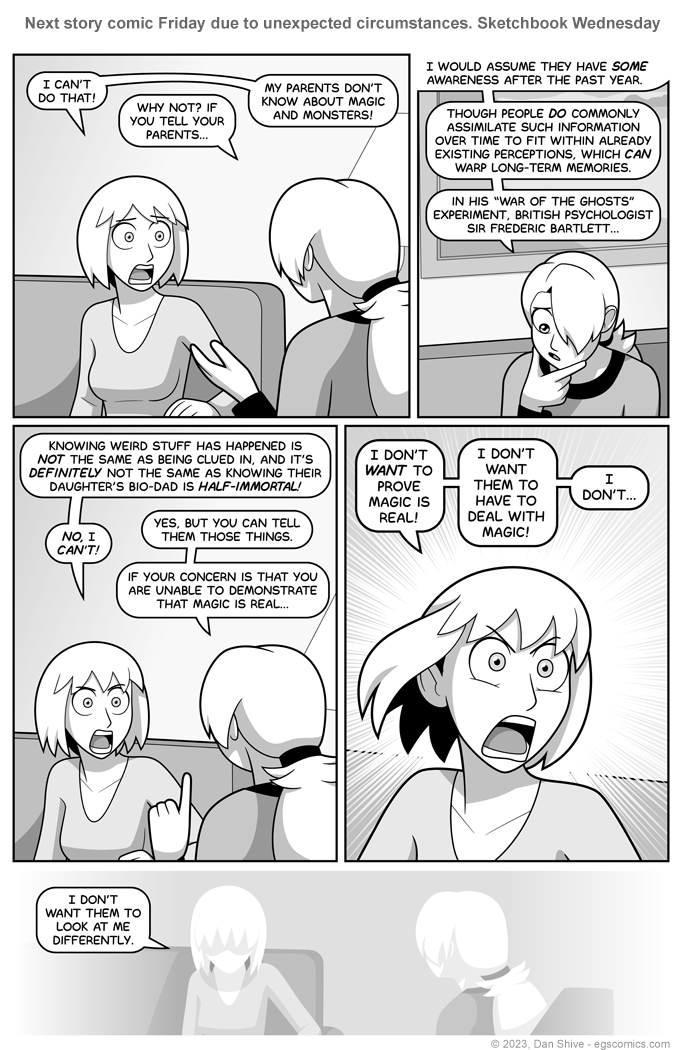 I very nearly credited the wrong psychologist, Jean Piaget, in panel two. Piaget coined the term for schemas, and schemas are relevant, but he didn't do the "War of The Ghosts" experiment.

Thank goodness I double-checked, or y'all would have NEVER let me hear the end of it.

Anyway, my "I am not an expert" retelling of the "War of The Ghosts" experiment was that Sir Bartlett shared a Native American folk story with a bunch of British college students. This story contained elements unfamiliar to the students, such as seal hunting and canoes, and various things about the story didn't make sense to them.

Over time, Bartlett would re-check their comprehension of the story. Many of their recollections would change over time, and change in ways that made the story easier for them to understand. Their long term memories effectively edited the story to better fit their pre existing perceptions.

If I got any of that wrong, it's my long term memory's fault. It changed things around to fit my pre existing perceptions.

Anyway, since learning of this experiment, I've decided that it is common knowledge among certain characters in my comic.

Specifically, those who have dedicated themselves to hiding the existence of magic and/or aliens. To them, it is a valuable lesson, and validation for methods that might otherwise seem silly and pointless.

I can imagine it being included in their basic training, meaning each and every paranormal investigations agent has this up their sleeve at parties as a "fun fact".