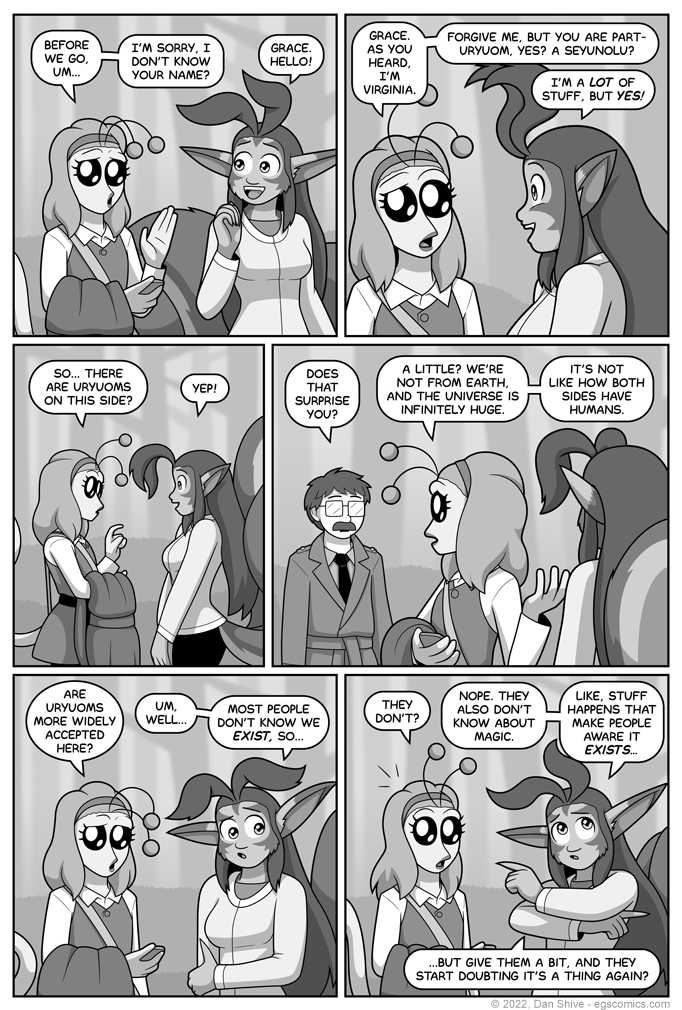 I don't recall if it's been stated that both sides have humans before now, but it's at least been implied by how the griffins have reacted to other characters (and "royalty" in particular).

I don't think it's much of a spoiler to say that the next page also heavily features Virginia and Grace in this same setting.

Three-tailed "Omega Grace" is one of the more complex character designs to ink, and Virginia is new, adding a bit to her difficulty. As such, I was a little concerned about how much time I'd wind up spending on this and Monday's pages.

With both pages already sketched, I came up with the scheme of working on both pages at the same time instead of trying to completely finish one, then the other.

This in and of itself was a good idea due to various shared elements. It was definitely faster if for no other other reason than the maintaining of momentum.

What was a mistake, however, was trying to completely finish both in one day. I wound up rushing myself, taking fewer breaks, giving myself a mildly sore shoulder (I've had worse), and tiring myself out so much that I overslept the next day without even having completed both of them.

That said, it only took an hour to finish them the next day, and my original goal was to have Monday's page done that day, so I did meet my goal. It's just it would've been perfectly fine if I'd left 3-4 hours of work, and it would have been better for my health if I had.

So I did make a mistake, but it turned out okay, and I have a better idea of what reasonable expectations for working on multiple story pages at the same same time should be.