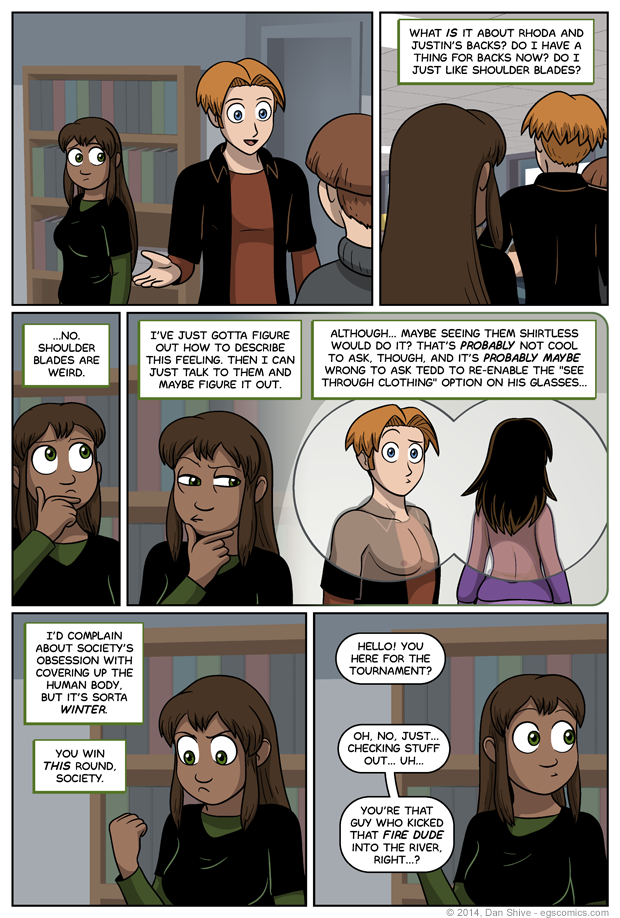 Something I've often pondered is what it would actually be like to view the world through glasses that see through clothing, and not just for Tedd-like reasons. Wait, Tedd's all about science and puzzles and junk... I guess it would be for entirely Tedd-like reasons no matter how you spin it.

Anyway, there are genuine things to consider from a "how the heck would that work" standpoint, such as how shadows and lighting would work. If you can see through the clothing, but it's still there and blocking light, would you actually be able to see much of anything?

Of course, such glasses are bound to be scientifically impossible for a number of reasons, which is where magic can jump in and say "yo, I've got this". Magic could just be like "you see right through clothes", and you'd have to just be like "fine, WHATEVER", because it's magic, and it doesn't have to explain itself.

And yet even THAT begs questions. For one thing, clothing presses against skin and stuff. Would the end result be an accurate representation of what it would look like if one's clothing were simply invisible, or would it create an illusion where it appears to not be there at all? The latter sounds more complicated and would probably cost more magic points or mana or whatever to pull off.

In any case, the message of this comic is clear: Shoulder blades are weird.