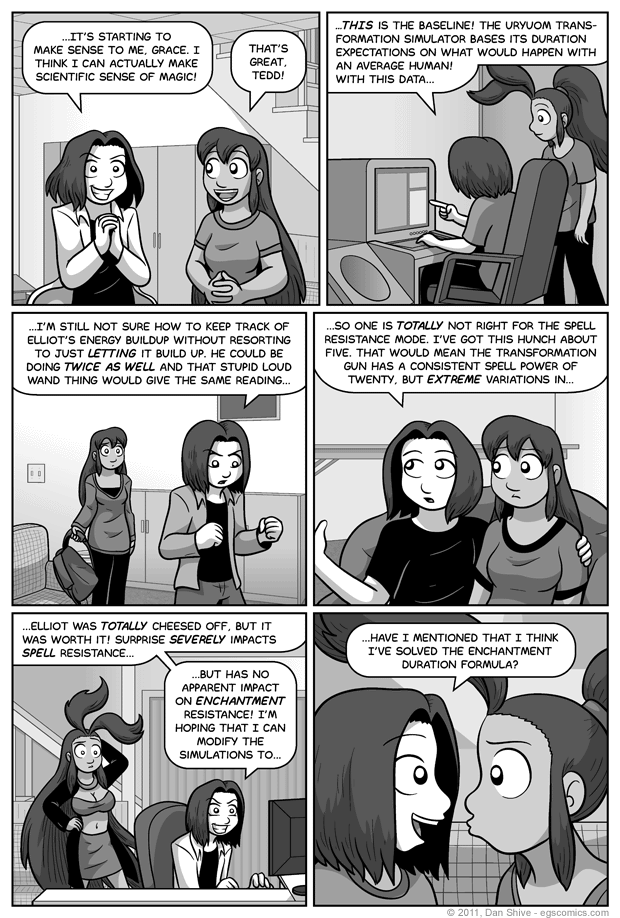 Yes, that is FV5 Grace in panel five. Yes, she can assume that form at will and combine it with other forms. No, you shouldn't expect to see it much. I know many of you would like to frequently see Grace with super extra fuzzy antennae, but it's hard enough to plan panel layouts around her regular antennae, darn it!

I'm intentionally vague about the exact dates of each panel, but exactly "when" we are after all this panel-by-panel time jumps will be made clear soon enough.

Everything Tedd says in this comic has a basis in something real. Well, "real" relative to the comic's universe, anyway. None of it is random or purely gibberish. That doesn't necessarily mean Tedd's right about what he's saying in every panel, just that there's an actual reason for each thing said.

It would not surprise me if the stuff Tedd's talking about sounds like one or more games out there. There are, like, a bazillion million games with magic systems out there. There's gotta be at least a few that every separate stats for "spells" and "enchantments". Anyway, my point is that this isn't supposed to be based on anything beyond generic magic mumbo-jumbo.

The Uryuom testing device has seen little use in the comic, and has undergone a bit of an appearance upgrade over time. While I've tried to stick to something similar to what is seen when Ellen first uses it, I've made it closer to the ground. I can buy that the Uryuoms designed the thing to be accessible to a variety of differently sized species, especially considering that they can morph themselves, but I could not buy that they would make it so high up that a human would have to be standing to use it when Uryuoms themselves are relatively short.

Well, usually. As I said, they can morph.

Tedd's basement has gotten another upgrade to its design. For one thing, there's a curtain between the half of the basement Tedd uses and the more utilitarian half of the basement (they have to put their water heater and stuff SOMEWHERE down there). I got tired of putting a vague "nothing to see here" gradient of shadows there, and a sliding curtain makes more sense to me than putting in a door. Easy to install, easy to get around (even if it's closed and one is carrying something), reduced chance of accidental Jeremy trapping, etc.

My favorite change that is only barely visible and not really identifiable in this comic is behind Tedd in panel one. There is an actual designated zapping spot now, and that's basically a protective padded exercise mat attached to the wall for added safety. People tend not to move backward much or fall when zapped, but hey, it could happen.