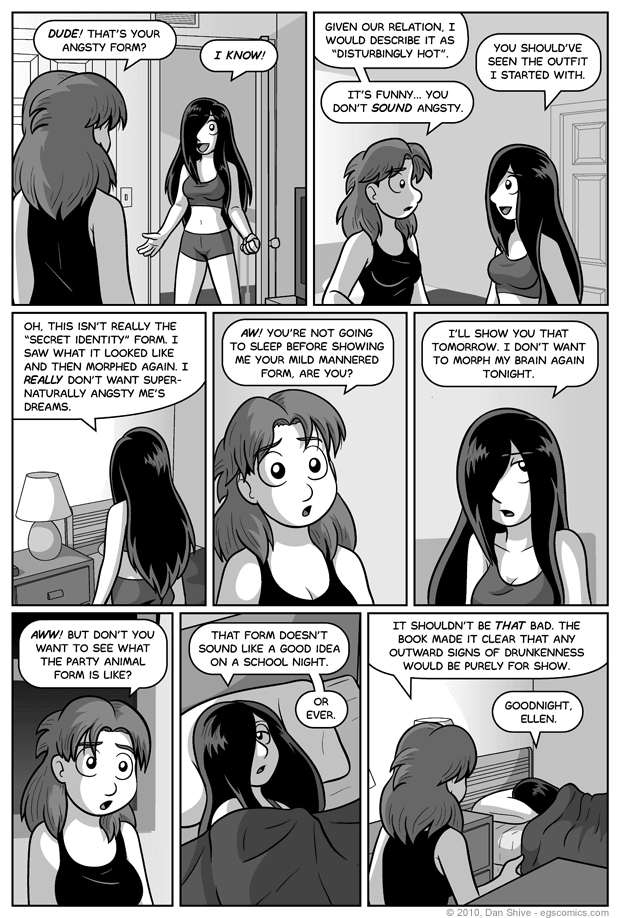 Posted December 17, 2010 at 1:00 am
You know, this whole "Elliot transforms into a hot woman and shows off to Ellen right before bed" thing is turning into a potentially disturbing trend...

As should be no surprise to anyone who has seen the latest sketchbook, this comic was originally going to be something else. I was going to switch scenes to a discussion that is basically still going to happen in another form, but the difference between it happening here and happening later is that it will actually make sense later. I'll give further details in those later comics.

Frankly, however, I like this as an ending to part 3 better anyway. It shows more of angsty Elliot (sort of), it acknowledges the party form, and hey, it means it ends with someone saying goodnight!

Oh, oh! And it gives me an opportunity to address something I forgot to mention in the previous commentary! Elliot's three secret identify forms are based on three secret identity archetypes. There are several heroes you could compare them to, but in this case, mild mannered is clearly inspired by Clark Kent, angsty is inspired by Peter Parker (and the entirety of comics from the 90s), and party animal socialite is inspired by Tony Stark.

Speaking of inspirations, the "I know!" line is very much inspired by Monica from Friends. I've heard people say it in such a way to express enthusiasm in a number of places, but if I'm being completely honest with myself, that's who it makes me think of.

As I almost did a couple times earlier in the storyline, I inadvertently flipped Elliot's hair as a result of using the previous drawing of his reflection for reference. This time it's less "almost" and more "I totally did", but I also have an excuse this time: Elliot was trying to mimic what he'd seen in the mirror, so it was HIS mistake, not mine! I'm not actually sure if that'd realistically happen while shapeshifting, but screw it. It's now canon that one could make such a mistake.