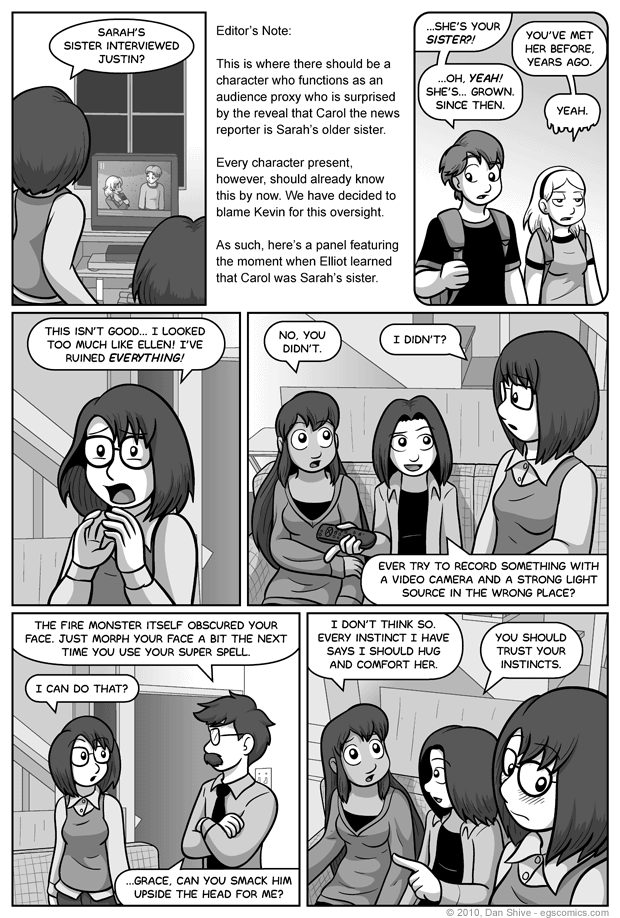 Posted November 5, 2010 at 1:00 am
I'll be asking this as a twitter survey later, but I'm going to ask it here first due to how late this comic's being posted (be nice; my computer died), and I prefer to give everyone a chance to read the new comic before tweeting these things.

"Grace needs to comfort mild mannered Elliot! How should she do this?"

The original panel three gag was "here's a panel of someone being surprised about something else" and would have featured Sarah being startled by a spider. I actually like that joke a lot more, but it occurred to me that not addressing when Elliot learned Carol was Sarah's sister would introduce a plot hole due to a scene in Sister 2.

As for how I allowed such a potential plot hole to exist in the first place, it's simple: I hadn't originally planned on them being related. When I finally decided I simply had to give the recurring news reporter character a last name, however, it occurred to me that there could be much fun to be had if she turned out to be related to Sarah. And thus, a retcon was born.

Seeing as how one of the most common questions I get is "do Sarah and/or Justin have siblings", this has GOT to make someone somewhere happy, if no one else.

As for Elliot not immediately recognizing her earlier, keep in mind that Carol is several years Sarah's senior. Odds are good he was in elementary school when he last saw her, and if Sarah's look in panel three is any indication, Sarah's not likely to bring up Carol without being prompted to do so. Why is that? Read and find out.

The whole light issue solution to Elliot/Ellen's face being obscured in the cell phone videos is inspired by a webcam I purchased a while back. I quickly discovered exactly what Tedd's talking about thanks to a lamp of mine in the background relative to me and my monitor. It looked like there was a sun behind me.

In the case of the comic, there would have been a fire man between the camera's and Elliot's face pretty much constantly, and if not, there would have been other obstructions keeping one from getting a clear look. Some of the patrons might have gotten a better look, but the videos, at least as far as is known? Not so much.

Of course, if this was CSI, some dude would magically multiply the resolution of the image, clean it up, and get the license plate of a nearby car from a reflection in Elliot's pupil.